The archive at the Red House documents the careers of Benjamin Britten and Peter Pears in great detail. Making up a fascinating sub-set of the archive are the papers documenting the works that never happened: the projects that were proposed but fell by the wayside, either because Britten did not feel inspired or because another idea shunted them aside. One can assemble a complete parallel career for Britten out of these: the operas of King Lear or Mansfield Park, or the ballet drawing on Australian aboriginal myths and music. One of these works-that-never-were raises, fleetingly, the possibility of perhaps the ultimate in odd-couple collaborations: between Britten and the comic genius Spike Milligan.

On the face of it, the two men seem very ill-suited: Britten very much a creature of routine and regularity, while all his life Milligan zig-zagged between depression and manic highs. They did, however, have things in common, and shared ideals. Each man was haunted by the horrors of war: Britten as a lifelong pacifist for whom, as for many in his generation, the First World War cast a long shadow, Milligan as someone who had served in the Second World War and been scarred physically and mentally by the experience. Both were aware that human beings were capable of unspeakable cruelty and were haunted by it, and both were involved in campaigning against violence and cruelty in a variety of ways. Each saw their times as overshadowed in particular by the threat of nuclear war: Britten maintained membership of the Campaign for Nuclear Disarmament from its foundation to his death, whilst Milligan was a supporter of the Direct Action Committee that began the 1950s Aldermaston marches against nuclear weapons. (They also had in common their musicianship – Milligan played a variety of instruments and had spent his youth as a member of jazz groups – and a need to look back at childhood as an innocent refuge from the horrors of which adults were capable, Britten of course writing work for children to perform and Milligan writing extensive nonsense poetry for them to read.)

Each entered the 1960s with a work that expressed directly their horror of war: Britten, of course, with the War Requiem in 1962, and Milligan with the absurdist play The Bedsitting Room, dramatizing a post-nuclear world (the one-act version first appeared in 1962; it was expanded to two acts in 1963 and a version was filmed in 1969). It is, then, less far-fetched than it might seem that in the mid-1960s their paths might have converged.

One of the eleven thousand files of Britten’s correspondence takes up the story. In January 1965 Milligan wrote to Britten (care of the Aldeburgh Festival: he did not know his address) suggesting that they collaborate on a comic opera of Alice in Wonderland. Britten, of course, would supply the music, and Milligan the libretto. In floating the idea, Milligan notes that his timetable means that he would not be able to start work on the project for another eighteen months. This would have had the two men starting work in mid-1966 on what could have been the weirdest cultural product of the 1960s, bringing Britten together with the leading English-language absurdists of the 19th and 20th centuries.

Milligan had to wait two months for a response; in March, however, Britten (who had been abroad until then) wrote back regretfully declining the project. He too cites the pressure of a full diary, saying that he is not able to say when he might have the leisure to take on this project. Maybe, once sufficient time had passed, he might have felt able to revisit the idea (although he was not generally keen on pursuing ideas suggested by other people) but by the time their diaries permitted, work would have been in progress on Jonathan Miller’s TV play of Alice in Wonderland, which was broadcast at the end of 1966, and their opera would have trailed in after this. (Strangely, of course, a few years later Britten was to have a similar experience, Visconti’s film of Death in Venice appearing not long before his own opera.)

The project was never revisited but there seem to have been no hard feelings: in 1971 Jack Hobbs, Milligan’s publisher, wrote to Britten asking if he could contribute to a volume of drawings by famous people that Milligan was assembling, under the title Milligan’s Ark, in aid of the Wildlife Youth Service (nature conservation being another interest that the two men had in common). Britten’s response was a quick basic scribble of fish, with a handwritten message “Sorry – I’ve never been a draughtsman; the only things I have ever drawn have been fish, - comes of living by the North Sea I suppose.” A letter from Jack Hobbs later that year confirms that the drawing will be included in the book, whereupon Britten pencils “O dear – have I made a fool of myself?” on the letter. Nonetheless, his drawing - on familiar Red House headed notepaper – is there in the book, along with drawings by other 1970s celebrities: the only actual collaboration to take place between Britten and Milligan, but it could have been so much more. 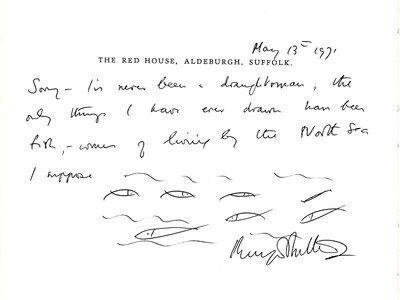 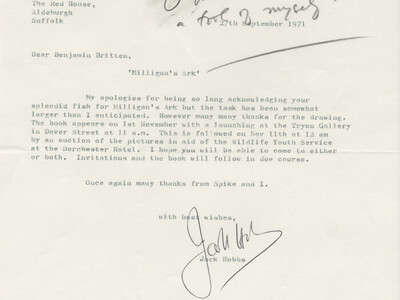 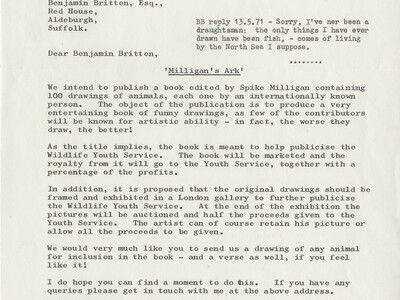 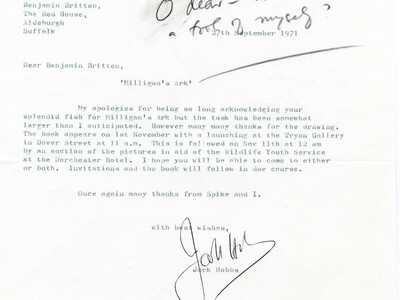