Transcript: This is the permanent exhibition about Britten’s life and works. There is lots to see and take in, but in the current circumstances we have created an abbreviated audio guide to the exhibition so that as many people can come through as safely as possible. The numbers on the audio guide correspond to printed numbers throughout the exhibition, in cases or on the walls.

Track 6: home movie footage of their holiday in Bali, 1956

The Grimes ‘hut’ and the manuscript of Peter Grimes

Britten and Pears at home

Track 76: Britten in between takes during the recording of War Requiem

Such an Artist to Write for

Track 78 Transcript: This year’s exhibition focuses on inspiration and collaboration. Britten worked with many of the twentieth century’s most celebrated performers, and composed music inspired by their particular talents and performing personalities. The person for whom he composed the most was his partner, Peter Pears and this exhibition explores how central Pears was to Britten’s compositional life. You can hear extracts from the works Britten wrote for Pears and many other artists. See the website or the handlist for further details.

Track 79: ‘Depression’ from Songs from the Chinese, op. 58 (composed Autumn 1957)
Text: Po-Chü-I, translated by Arthur Waley
Performers: Peter Pears tenor, Julian Bream guitar
Recorded in 1963 (RCA)
Britten composed this set of six songs for the performing partnership of Pears and the guitarist Julian Bream (b. 1933). They had been giving recitals together since the early 1950s, usually of seventeenth century English music, with Bream playing the lute. Britten would later compose the solo guitar piece Nocturnal, after John Dowland for Bream.

Track 80: Phaedra (composed July-August 1975)
Text: Robert Lowell, after Racine’s Phèdre
Performers: Janet Baker mezzo-soprano, English Chamber Orchestra, conducted by Steuart Bedford
Recorded in 1977 (Decca)
This was one of the last pieces Britten composed, and it was premiered less than six months before he died. Janet Baker (b. 1933) had played the role of Kate in Britten’s 1970 opera Owen Wingrave and was a performer he greatly admired. At the end of this dramatic cantata, Phaedra has taken poison because of her ‘adulterous passion’ for her step-son.

Track 81: The End (‘After the blast of lightning from the East’) from War Requiem (composed April 1961-January 1962)
Text: Wilfred Owen
Performers: Dietrich Fischer-Dieskau baritone, London Symphony Orchestra, conducted by Benjamin Britten
Recorded in 1963 (Decca)
Britten approached Dietrich Fischer-Dieskau (1925-2012) directly to perform in the premiere of his War Requiem, in the newly-consecrated Coventry Cathedral in May 1962. It was important for the composer to have performers from previously warring nations taking part in this great pacifist work, as well as in the recording. Britten later composed the song cycle Songs and Proverbs of William Blake for Fischer-Dieskau.

Track 82: Suite for Harp (composed 1969)
Performer: Osian Ellis, harp
Recorded in 1976 (Decca)
Like Julian Bream, Osian Ellis (b. 1928) became a regular accompanist for Peter Pears, and particularly so after Britten’s illness in the early 1970s meant he could no longer play the piano. But even before that time, the harp was well-served in Britten’s output with works such as A Ceremony of Carols (1942) and this very charming Suite, composed specifically for Ellis in 1969.

Track 83: The Turn of the Screw (composed March-September 1954)
Text: by Myfanwy Piper, after the story by Henry James
Performers: Jennifer Vyvyan The Governess, English Opera Group Orchestra, conducted by Benjamin Britten
Recorded in 1955 (Decca)
The Turn of the Screw is one of Britten’s chamber operas (with a small orchestra, and only 6 singers), and relates a ghostly tale of corrupted innocence and (possibly) madness. The soprano Jennifer Vyvyan (1925-1974) premiered the role of the unnamed Governess, who arrives at a large country house to take charge of two children – both of whom seem to be haunted by previous residents of the house. Vyvyan later performed in premieres of A Midsummer Night’s Dream (1960) and Owen Wingrave (1970).

Track 84: ‘The Auld Aik’ from Who are these children? (composed spring-summer 1969)
Text: William Soutar
Performers: Peter Pears tenor, Benjamin Britten piano
Recorded in 1972 (Decca)
This is the last song cycle Britten composed for voice and piano. Its vocal range is noticeably lower than other cycles composed for Pears, reflecting Britten’s accommodation to Pears’ voice as the singer got older. The cycle sets a mix of short texts in the Scottish vernacular, and longer, more serious verses reflecting the poet William Soutar’s horror of war and violence.

Track 85: ‘Lines written during a sleepless night’ from The Poet’s Echo (composed August 1965)
Text: Alexander Pushkin
Performers: Galina Vishnevskaya soprano Mstislav Rostropovich piano
Recorded in 1968 (Decca)
Britten set song cycles in several languages other than English, including French, German, Italian and The Poet’s Echo in Russian. It was written at a composer’s retreat in Dilidjan, Armenia in the summer of 1965, where Britten and Pears also holidayed with their Russian friends, soprano Galina Vishnevskaya (1926-2012) and cellist Mstislav Rostropovich (1927-2007). The cycle celebrates Vishnevskaya’s powerful soprano voice, and in this recording Rostropovich accompanies her on the piano.

Track 86: ‘Canto Primo’ from First Suite for Cello (composed November-December 1964)
Performer: Mstislav Rostropovich, violoncello
Recorded in 1968 (Decca)
Britten and Mstislav Rostropovich met in 1960, and the cellist immediately demanded a piece from Britten. The Sonata in C for cello and piano resulted soon afterwards, and Britten followed it with a Cello Symphony, and three Suites during the 1960s. The opening of the first Suite is beautifully romantic and song-like, and so rich in texture it seems as if more than one instrument is playing.

Track 87: ‘Prologue’ from Serenade for tenor, horn and strings (composed March-April 1943)
Performer: Dennis Brain, horn
Recorded in 1944 (Decca)
Dennis Brain (1921-1957) came from a family of horn players, and became the most famous of his generation in post-war Britain. He was immensely popular as an orchestral player, but also inspired and directly commissioned contemporary composers to write for him as a soloist. Britten wrote the beautiful song cycle Serenade with a horn part, especially for Brain, and later on composed a prominent horn part in his large-scale vocal work Canticle III. Brain died in 1957, aged only 36, in a car accident.

Track 88: ‘Oh, my black Soule!’ from The Holy Sonnets of John Donne (composed August 1945)
Text: John Donne
Performers: Peter Pears tenor, Benjamin Britten piano
Recorded in 1947 (EMI)
This dramatic and searing cycle was written almost in a frenzy after Britten returned from a visit to Belsen, with violinist Yehudi Menuhin, in 1945. The power and pain of Donne’s texts are represented by the (at times) thunderous piano parts, and by the demanding vocal lines. It was completed only two months after the first performances of Peter Grimes, in which Pears had tackled the challenging title role: recorded in 1947, this cycle demonstrates his extraordinary ability to express a huge range of emotional and dramatic colours with his voice. 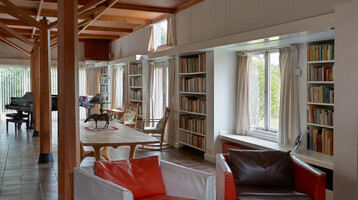 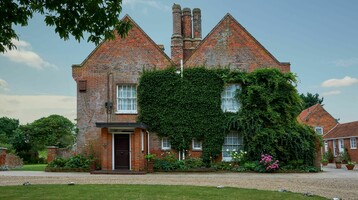 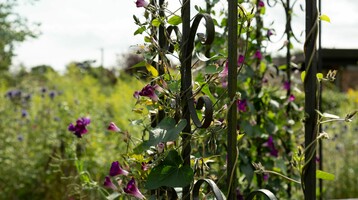