Benjamin Britten and Peter Pears founded a special kind of Music School. Their 'creative campus' would offer young musicians the chance to develop their careers in the magical surroundings of Snape Maltings, with its never-ending skies and shingle beaches at nearby Aldeburgh. From the start the school invited the public in, to observe the stars of tomorrow evolve under the guidance of pre-eminent musicians of the day. The Aldeburgh Festival provided the first major platform for several students, many of whom would return year after year to the stage where their careers had begun.

This year the school, now known as the Britten Pears Young Artist Programme, celebrates its 50th year, and an important project is underway. Alongside a year of celebrations we are drawing together, for the first time, the memories of those whose careers it shaped. Here project consultant, Amanda Chambers, gives a glimpse into the project so far...

The Britten Pears Young Artists Programme (formerly the Advanced School of Music Studies) is arguably the most tangible example of Britten and Pears’ passion to be useful. Initially it developed from the vision of Imogen Holst who had previously taught at Dartington. This alongside Britten and Pears’ own experience in the 1940s of the supportive environment at Tanglewood in the USA, provided a benchmark for the school. But it wasn’t until the development of Snape Maltings as a performance, rehearsal and training space, that the reality of a creative campus for talented young artists began to evolve.

The first early iteration was a ‘Study Weekend’ which began on Friday 22 September 1972 - a set of masterclasses led by Pears with the support of Nancy Evans, Lucie Manen (his own vocal mentor), and a 21 year old Graham Johnson as accompanist. Pears had hand picked a selection of young singers to attend the weekend including Neil Mackie (later to be awarded an OBE), Pamela Brady, Mary Clarkson (now Anderson), Glyn Davenport, Robert Gibbs, Mark Lufton, Anthony Rolfe Johnson and Helen Sava. Another important aspect of that weekend was the invitation made to the general public to ‘observe’ - in an attempt to make it more inclusive. Loyal audiences continue to attend masterclasses today, to enjoy a rare window into the world of professional musicians.

By the end of the 1970s an established institution had emerged, attracting artists from the UK, Europe and USA, who came to the idyllic surroundings of Snape and Aldeburgh to be mentored by some of the world’s leading performers and musicians. In this way young artists were not only given technical supervision but were also exposed to the highest standards of performance, musical rigour and production opportunities. But perhaps the crucial point was to offer something different from the conservatoires and academy structure. In this way an artist could for the duration of a few weeks completely immerse in several aspects of their practice and be encouraged to find their voice without the formal constraints of established musical traditions.

What has made the experience particularly memorable for artists was the chance to work intensively during the day at Snape, to then travel back to the idyllic sea coast at Aldeburgh for relaxation and inspiration (as Britten and Pears had done) - this proved to be a perfect balance. Another important feature of the School was to encourage young artists to take part in the annual Aldeburgh Festival, a tradition which continues to this day. For artists to not only experience a live performance but on the same Jubilee Hall stage as Britten’s first opera’s was unique, and ground breaking and unforgettable.

In their own words: former students and tutors share their memories

The School was also set within the context of other opportunities for young people - and for those with a keen interest in music but perhaps not the desire to make it their profession - an opportunity to volunteer as a Hesse Student was available during the Aldeburgh Festival. Former students regularly site this as one of the most enjoyable and inspiring times in their life. The Aldeburgh Young Musicians programme later developed with the objective to nurture local talent and runs to this day with training and residential opportunities for school aged musicians.

During its 50 year history the Young Artists Programme has consistently nurtured the careers of many of the UK’s leading artists, many of whom have come back to teach. Similarly the teaching programme has attracted leading practitioners in song, piano, string, conducting and composition. A notable figure is the composer Colin Matthews who along with Oliver Knussen in 1992 established the Contemporary Composition classes and went on to hold the executive position of Director of Music.

Behind the scenes the management of the music school was key to its success, not only in its efficient administration but also in the support it provided pastorally for the young artists attending. John Owen was the longest standing manager of the school between 1979 - 1991 and is widely regarded as having a major influence. In addition, as exemplified in the current exhibition at The Red House, Britten and Women, the administrative expertise of Rosamund Strode, Jenni Wake Walker, Ann Surfling, Pamela Wheeler, Mary Clarkson and Diana Hiddleston (whose father William Servaes, had served as the Manager of the Aldeburgh Festival), to name but a few, ensured the smooth running of operations. It is thanks in particular to Strode who documented everything, that the Archive is full of depth.

In this 50th Anniversary year of the Britten Pears Young Artist programme, the organisation is yet again breaking new ground as a newly merged organisation. There is a strong desire to re-connect with past members of the Young Artist Programme and those associated with it. Not only to fill in the gaps in the historical record but to meaningfully continue the gift that Britten and Pears left to the organisation 50 years ago and to stay relevant and inspiring to future generations. 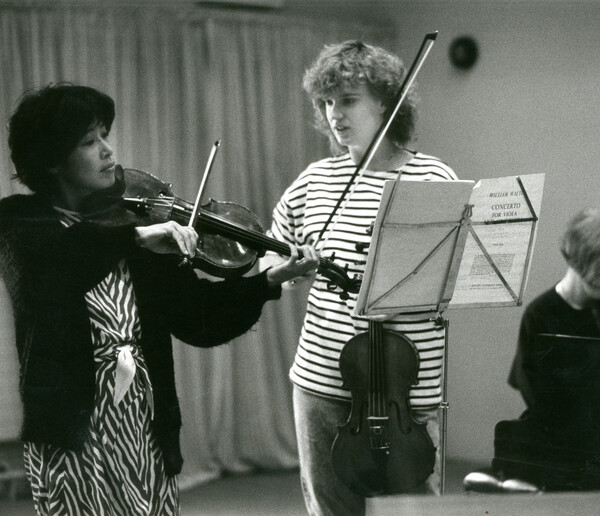 Were you a Britten Pears Young Artist?

We are actively seeking stories and experiences from our Alumni to share and inspire future generations of students and music lovers.