Roger Wright has presided over an extraordinary phase in the organisation's development including the purchase of Snape Maltings in 2015 and the merger in 2020 of two organisations into Britten Pears Arts. In this special 50th Anniversary interview he shares his thoughts about the legacy of Benjamin Britten and Peter Pears and how young artists today can still experience something special at Snape and Aldeburgh.

Can you say a little about your role at Britten Pears Arts and what inspired you to come here?

I'm the Chief Executive of Britten Pears Arts and my responsibility alongside all of my colleagues is the running of the organisation. As much as anything else, it's about keeping true to the vision of our founders, Britten and Pears in 1948 at the start of the Aldeburgh Festival. But crucially as with all organisations, making it fit for purpose now and making those elements of our work which are so distinctive, meet the needs of our current world, both in terms of audiences and also the broader communities here, nationally and internationally - alongside the needs of the musicians and the world in which we live and work.

BPA is celebrating 50 years of its programme for young artists (formerly the Britten Pears School for Advanced Musical Studies), what do you think Britten and Pears would make of the progress that has been made?

It's really important to resist giving any sort of sense of what they might have thought about this or that. However, we have an advantage in knowing the sort of things that they were really interested in and committed to. We have this extraordinary archive, their diaries and letters and there are still many people who knew them who are with us today. So it's not too fanciful on our part, to think they would probably be astonished and I hope rather pleased and proud, not in an arrogant way, that so much of what they thought about the potential of the Snape site, particularly the development of a creative campus, has actually come to pass.

They talked about teaching and mentoring and early careers development and in the 1950s, and 60s, and that was ground breaking. So, it’s exciting to know that what they held dear has been able to develop.

They would have had no idea about certain ways in which society has changed, but they would also know what music could do to help the common good now to help bring communities together. And crucially, the fact that Britten Pears Young Artists Programme, offers coaching and mentoring in a quiet, confidential space, away from formal educational establishments, was part of the beauty of the programme back then, and is a major part of it now.

Looking back over this 50 year history, the range of students, tutors and performers who have taken part - what are the highlights for you?

Because I wasn't working here for so much of it, it is interesting to hear what a lot of people have told me about particular experiences they had - such as Slava Rostropovich conducting Eugene Onegin in 1979, the particularly personal teaching styles of his wife, the distinguished soprano Galina Vishnevskaya or the tenor Hugues Cuenod in those early years.

How many distinguished collaborative pianists have also benefited so much from this School: Roger Vignoles, Julius Drake, Malcolm Martineau, Ian Burnside… the list is a long one. It’s an extraordinary testimony to the strength of the programme itself, that there are such distinguished alumni.

From my own time here I am particularly struck by the range of the programme itself: Semyon Bychkov conducting Tchaikovsky Manfred Symphony; Marin Alsop with the most wonderful performances of Britten’s Young Person's Guide to the Orchestra (a great piece for a young, early careers orchestra); the intimacy of the chamber music coaching with the Belcea Quartet with Alasdair Tate, young singers being coached by people like Sir Antonio Pappano, Dame Ann Murray and Sir Thomas Allen - there’s an extraordinary range in the singing programme.

And then there’s the Contemporary Composition Programme, famously begun by Oliver Knussen and Colin Matthews. That range of activity, for a formal establishment would be amazing but for a non-formal educational hub it’s extraordinary. And the students themselves talk about the warmth and creativity which is in the DNA, in the walls of the buildings on our two sites. It's particularly thrilling to hear music being made, to just open the door and find that quiet work going on between the experienced professional just gently imparting wisdom.

I believe you attended a music school masterclass here as an observer in 1980 - can you tell us more about that experience and what inspired you to attend?

I can tell you honestly (despite it being 42 years ago!) the thing in my mind is the presence of Peter Pears himself, because that was his 70th birthday year. One of the reasons that I was here was that I was working for an organisation called the British Music Information Centre whose job it was to promote British 20th century classical music. I was organising an exhibition in celebration of music by British composers other than Britten which Peter Peters had commissioned and premiered. So I had the thrill of being able to visit The Red House and meet Rosamund Strode, one of Britten's musical assistants, and being let into this extraordinary world.

I knew Ursula Vaughan Williams well and we observed some classes together. I remember the spirit of being let into a world of knowledgeable friendly people. I grow a little tired of this sense that we don't need experts anymore. The joy and privilege of meeting people who frankly know more about subjects we would like to know about - whether that’s knowledge of repertoire, interpretation, or technical - all in that remarkable location was really special.

I was also struck by the freedom and creativity. Because tutors were not part of a formal faculty they were arriving and meeting other tutors and young people all for the first time. That non-formal structure liberated the coaching away from normal teaching practices which students might be used to. It gives a freedom, but still with rigour, to the coaching. Today, the young artists often work with us to agree who they might wish to work with. And we then see if we can invite their choice of tutor. That’s a very refreshing thing.

Britten and Pears talked about teaching and mentoring and early careers development in the 1950s, and 60s and that was ground breaking. So it’s exciting to know that what they held dear has been able to develop.

What do you see as the main function of the Young Artists' Programme today? How is BPA preparing students for a career in music?

Many of the original intentions behind the programme, when it was launched 50 years ago, remain true today. Some of the ways in which the programme has shifted, however, I think does reflect the changing nature of our world. So I think there's less emphasis for instance at the moment on large orchestral courses. That's partly financial with the additional constraints on international travel. But the main reason is that there are more orchestral experiences available elsewhere, so it isn't as distinctive or as necessary for us. I think what we’ve also done is realise that for a larger number of people, we can offer something which is much more impactful in terms of their individual and collaborative development as musicians.

I think one of the other changes from 50 years ago is that the careers of musicians now often have a richer portfolio-type approach. This can take you into some of the areas that Britten Pears Arts has been involved with for decades. It’s some of the most important work that we do - and it’s about highly skilled musicians doing work either in creative health sessions, or in the criminal justice environment, it may be working with dementia or Parkinson's sufferers, and it may be singing programmes. And all of these things which are such an important part of the heritage of Britten Pears, knowing how music could be useful, shows how music can bring communities together. This is now what a lot of musicians are choosing to spend their time doing, because they see the real value of this type of work in addition to their normal concert life.

We also try to prepare young artists on how best to present themselves - not just in terms of marketing, but in the broadest sense of considering what their profile is, their intentions and how to communicate them. We give media training where appropriate and advise on elements of their career especially how to deepen their engagement with audiences. There is still a core focus for us on the tradition of the western classical canon. But there's also a huge additional set of musical opportunities and it's really important that that we reflect that as well in future.

Thinking about the future, what plans does BPA have to develop its support for emerging young artists?

When you've got such a rich heritage as Britten Pears Arts it's sometimes easy to think that you just follow the heritage but I was struck by a quote from Somerset Maugham who said that ‘heritage should be a guide and not a jailer’. I think that the Britten Pears Young Artists Programme is a striking example of where the founding vision has held strong and we're grateful for that inspiration and openness to want to train the next generation.

If one had a magic wand, then being able to bring the derelict parts of Snape back into life so that the site could become a 24/7 creative campus, would be wonderful. And the momentum is there, in recent years especially, with the opening of the Britten Studio and Hoffman building in 2009, then in 2015 the acquisition of the Snape Maltings site and in 2020 the merger into one organisation. Additionally, this 50th Anniversary moment gives us a chance to re-engage with past and present young artists and those involved with the music school to celebrate how Britten and Pears's original vision is still so alive and well.

It’s been said many times how important this sense of place is to people - not least young artists coming to stay in Aldeburgh and Snape over the last 50 years. What makes the two places important for you?

Because it was in Aldeburgh that Britten and Pears started the Festival from which the organisation grew, there is something about the name which imbues the organisation with an artistic credibility and yet Snape was the first place Britten lived when he left the family home. It’s the place where he wrote Peter Grimes and Young Persons Guide to the Orchestra and all those extraordinary pieces from the late ‘30s and ‘40s. And he knew the Maltings as a working industrial site and he and Pears had the vision to create the unique cultural site here.

Both these places are locked at the hip. Snape was the vision of Britten and Pears and thank goodness it was possible to acquire and develop the site. And Aldeburgh, not just because of the Red House, but because of the church, the cinema, Jubilee Hall and the shingle - it’s in our history. It’s those two places together that make what we offer so special. Reedbeds and shingle. You can’t separate them. 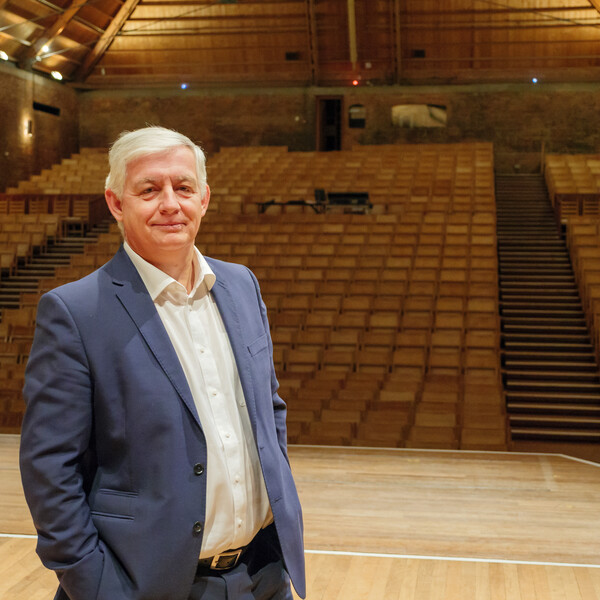