Mary Clarkson (now Anderson) a Mezzo Soprano - was a student at the first ‘Study Weekend’ for Singers in September 1972 . She went on to assist in the Britten / Pears Library and developed her singing with tutoring from Pears with whom she became close and took part in further masterclasses and performances.

"I was working at the Aldeburgh Festival Office and in the afternoons at the Red House in the Library. I had one day off a week for singing lessons with John Carol Case. He participated in the first classes (English Translations of German Lieder). So through both these connections I knew about the classes. Peter wrote me a letter which I have saying he didn’t need to hear me in advance if John Carol Case recommended me. I sang Purcell’s 'The Blessed Virgins Expostulation’ as specified by Peter. Then Schubert’s ‘Heidenröslein’.

My initial recollections of that Study Weekend are that I was nervous! The classes were held in what is now the Peter Pears Recital Room with a makeshift stage and seats on the flat. I remember looking out and seeing Mr Britten and being terrified and so relieved when I got to the final part of the Expostulation. However everyone was very kind and complimentary. ‘Heidenröslein’ was with Lucie Manen (Pears’ own tutor). She stopped me immediately and said to sing with my whole body and not ‘pick at it' which I did - so ‘Heidenröslein’ was transformed. It was a lesson learnt to sing Lieder with full voice.

Anthony Rolfe Johnson was the star of the show. He was already an established singer and more mature than the rest of us which added to the weekend. Attendance was mandatory at every event. Peter was there throughout. But it was very informal. Peter and Lucie were always very kind to us and encouraging. Never a harsh word. Everyone felt at ease to chat to anyone.

The whole weekend had a profound effect on me. It altered the way I approached song poetry which was so important to interpretation of the the music - the poetry of the French, German and English. It taught me that to be a performer you have to dedicate yourself to the music. I was then asked to assist with the Library which had become too big for one person to manage so Bill Servaes kindly released me from my contract with the Festival. Peter would help with the books and would also continue to give me singing lessons too.

The library didn’t exactly develop but we had to catalogue it and put books back on shelves, sort out letters which had been taken out of the books etc. It was finished after Britten’s death when my catalogue was used for the Estate. Peter was an avid collector of music - compendiums and first editions so it was exciting. Britten used to work in the mornings in the Library so I would sort music out in the stable then go into the library in the afternoon. He was a very kind and considerate employer. I was obviously aware of who he was and so at times very timid.

Everything was informal but organised, Peter would say “come on let's have a lesson” which would end up with a sherry in their drawing room. Britten came and listened if Peter felt it was good enough. All this led to a BBC Radio Masterclass on the Britten song cycles ‘On this Island’ and ‘Canticle One’. A masterclass with Fiona Hibbert the harpist on Britten’s ‘A Birthday Hansel’. Britten gave permission for us to perform this piece before its publication.

A grant was given to music societies in East Anglia for this work. The Queen Mum had to say yes too! Performances in the Festival followed and the Easter Bach Passions which included students from the School with Peter as the Evangelist and John Shirley Quirk as the Bass/baritone.

They were generous with their time and knowledge. It can only be described as a very happy place to be. I was very privileged. My association and friendship with Peter continued for the rest of his life. I would phone and ask for help. Or he would phone. On one occasion it was the afternoon of Britten’s death. We were due to be singing a Handel Oratorio for Ipswich Bach Choir. Peter just wanted to go over it with me but in retrospect he needed a distraction.

My memory of them both is of love, friendship and music. I cannot ever thank them both enough for what they gave me. I think of Peter often and what a very brave man he was and indeed Mr Britten. There were Bach weekends with the likes of Janet Craxton the oboist and George Malcolm who were inspirational. Joan Cross was a fantastic Director and taught us all so much. Firm but kind. She too became a close friend.

There was always a Danish contingent with Axel Schultz who was a friend of Peter’s. Because of Peter and Mr Britten’s position in music they invited the very best and they came. As an extra as staff we were offered free tickets to all Festival concerts so that in itself was a wonderful life enriching experience." 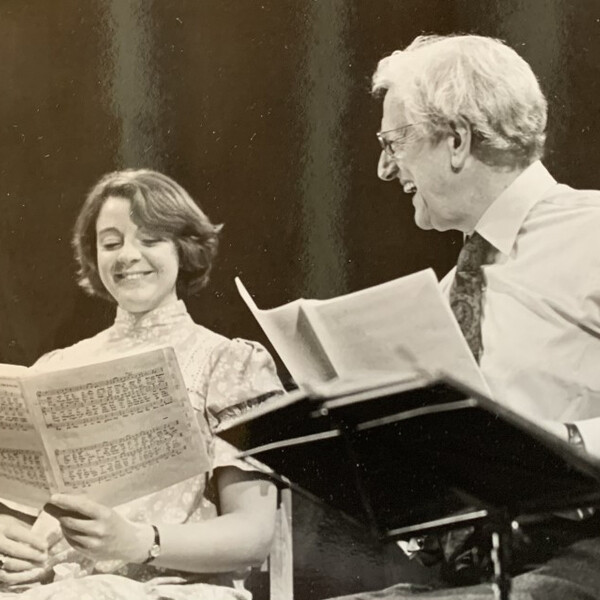