Diana Hiddleston has maintained a close relationship with Britten Pears Arts from her involvement as a Hesse Student at the Aldeburgh Festival (at that time managed by her father William Servaes) to becoming an administrator in the late 1970s to her more recent involvement as a supporter of the organisation. Here she remembers a key moment in the development of the now famous performance of Eugene Onegin in 1979 which helped to put the school ‘on the map’.

The genesis of the idea to perform Tchaikovsky’s magnificent opera ‘Eugene Onegin’ (set to a text by Pushkin) at Snape came from Mstislav Rostropovich (known as Slava). Bill Servaes was at that time CEO of what then was called the Britten-Pears Foundation. Looking for strategic support for the future of the School for Advanced Musical Studies after Benjamin Britten died he found a wonderfully willing friend in Slava. They had frequent conversations about how best he could support the Festival and Britten’s legacy. ‘Bill – I must buy a house and BE there’. Bill found him a house in Park Road in Aldeburgh which he bought immediately and became one of several artistic directors that Peter Pears appointed to support him after Britten’s death.

Slava’s international career took him across the globe but he was often in touch either in person, or through his agent Lilian Hochhauser, wanting to be of assistance in securing the future. He played for two large fund-raising events in the City of London, one in the Goldsmith’s Hall when he played the Haydn Cello Concerto at a wonderfully breakneck speed; the other in the Glazier’s Hall with his daughter Elena, where they played amongst other pieces, Schubert’s Sonata for Arpeggione and Piano in A Minor. He had recorded this with Britten in earlier years and finished the concert in tears.

“You see Bill, it is the natural thing to do – we have to do ONEGIN. Galina will direct it and I will conduct it, and your orchestra is already there. Onegin was written for these young people and everyone will support the school and Ben would say YES.” Tchaikovsky had entrusted the first performances to students at the Moscow Conservatoire, and it was true the school had not only immediately attracted excellent young singers but the Britten-Pears Orchestra had already been formed with great success with post-graduate students from music colleges across the country.

Peter Pears was naturally much concerned with continuing the work of the Festival as well as the school which had begun in 1975, but although it seemed an ideal way to highlight current success and signpost the future, there was initial reluctance in some quarters to consider the idea as it was seen as too much of a risk. There was a meeting in London where the case was made in Slava’s absence where there was much hesitation. After the meeting, standing with other young friends in the kitchen nearby, Marion Harewood (later Thorpe) and Cecil Aronowitz (who ran the String Course) began talking with them about the project. They left seemingly encouraged by the huge enthusiasm of the young who of course knew nothing of the organisational stresses it might involve but understood the magic of an opportunity to work on an extraordinary piece written for young performers under the guidance of Slava and Galina Rostropovich at Snape.

To see and hear such performances from a truly youthful company seemed to embody everything that Britten and Pears had wished to achieve in developing the School of Advanced Musical Studies.

At this time, I was working for the Festival at the School for Advanced Musical Studies after getting married, having had a few years post university working at ENO as assistant to the Head of Music Staff and then company managing on tour. The following week I went for a meeting with Peter about schedules for upcoming masterclasses, and he asked me what I thought about the idea. I knew Onegin well having worked as a young administrator on two recent productions and felt excited by the possibilities. I could feel that he was tentative about it. It seemed obvious to me that if Peter felt he could take on the role of the Singing Master Triquet (a role I had just seen performed by French tenor Hugues Cuénod at Glyndebourne & who later came to teach at the school) amongst his own pupils with Galina directing and Slava conducting the B-P Orchestra it would be something unique and attract both interest and future financial support. He seemed encouraged by that idea and although there was much to-ing and fro-ing about how the production might be achieved, finally it was ‘on’.

The performances were of an extraordinary standard with much attention both from the press and others in the operatic world. There was so little chance at that time for young singers to ‘strut their stuff’ except at college shows; this was an ideal showcase.

Watching the students rehearse was fascinating. Galina took no prisoners, but also gave great confidence to the performers, supported by Peter on and off stage, all of whom went on to make first-class careers as a result. The magic that Slava found in the pit from the orchestra was equally electrifying and to see and hear such performances from a truly youthful company seemed to embody everything that Britten and Pears had wished to achieve in developing the School of Advanced Musical Studies. (There are some delightful photographs in the archive). It set a precedent for later years when wonderful teachers worked on productions led by students which then became part of the Festival programme.

Image: Diana Hiddleston (nee Servaes) with Britten and Colin Graham at the Red House 1976 at the party to celebrate Britten's peerage. 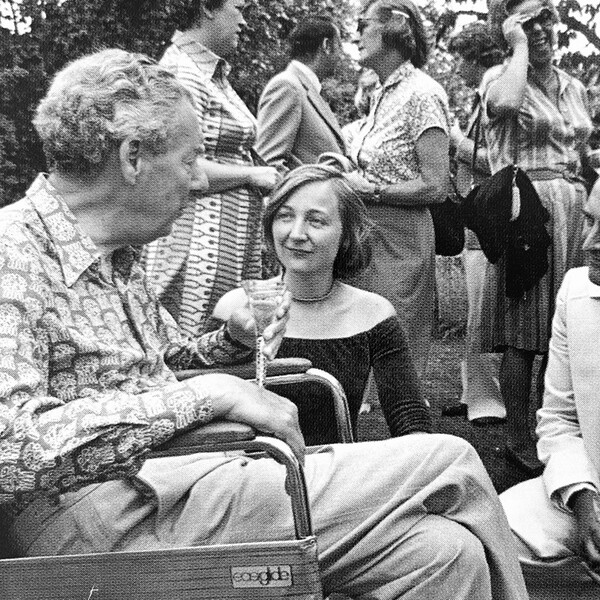