What do you think makes Power of Stories special as an exhibition?
I think what makes Power of Stories special is many things, in that it's kind of multifaceted. You've not only got the Marvel costumes, you've got very rare Britten archive material, which has never been seen – It's not like it's actually had a second outing, some of this stuff is so rare that it's never been out on exhibition. That's exciting enough, we've got community artwork, which was directly inspired by minority places of identity and how they felt about it. We've got two amazing photographers, Federico Ramos and Jonathan Ferguson. We’ve got interactive things for kids and we've got drumming workshops. I think on lots of levels it appeals to families and adults alike. It's multifaceted, but also having it at the prestigious Britten Pears Arts feels like it's the crescendo at the end of the tour.

Why was Snape Maltings chosen to host the exhibition?
Because Snape Maltings is in East Suffolk and it has a certain demographic – and to have black faces in their concert foyer says a lot. Britten Pears Arts have always been inclusive and diverse – it was built on the foundation of Benjamin Britten and Peter Pears. And it's good to remind people how inclusive it is as an arts venue. It feels right, it feels very well placed.

It's in the foyer itself as well, which is very good because it's a public space. It's not a separate exhibition space where some people may feel intimidated by walking in and seeing artwork. It's for everybody. It's for the public. It's sometimes transitory between people going to the toilet. And also, it's quite nice to make a big statement.

What is different about the Snape exhibition compared to the other venues?
What’s different about this one is that we've got very specific community artwork, which was created, thought about and put together at Snape. I was part of that process where we had black, African and Caribbean members of the community come in, and visually describe how they felt being a minority in a rural area.

Also the Britten archive, which Chris Hilton, Elma Glasgow and I chose. It has potential to be a bigger exhibition in itself, in terms of how forward thinking Britten and Pears were for their time and how they had influences from all around the world coming in right from the beginning. Essentially, the foundation of Britten Pears Arts is the knowledge of all of these cultures coming together, and I think that's a little bit lost now.

So the good thing about it coming here is that there’s the community artwork, there’s the Britten Pears archive, there's the rare comics – I know there was some comics in two of the previous destinations in the Food Museum and in Ipswich, but these are very specific Marvel comics with black people on the front cover, which were very early comics generously loaned to us my Matthew Applewood who has the biggest collection in the UK, which is pretty special.

How has the archival materials from Britten and Pears life enhanced the exhibition?
Massively, because it gives it context. As a host for an exhibition, as someone who is a curator and puts on exhibitions in various spaces and in a gallery, it's important to have context for the venue. It's really important to remember that actually arts is inclusive; the word art and arts are inclusive and therefore the Britten and Pears archive is especially poignant, because it relates to everything. We’ve actually sourced some anti-apartheid letters from Britten’s correspondence and this emotively powerful material is just one element from the archive collection that you could explore more. I was moved to tears when I read that for the first time, because, even as someone who's been living here for 20 years, I didn't know that he was connected to the anti-apartheid movement, and that he didn't want to be a part of that; he wanted his music to be seen by anyone, by any human being. So it directly relates to a feeling of being included for any minority, and makes people feel very included.

Why was Marvel chosen for the exhibition? Were they involved in the creation of it?
Marvel were really chosen by Aspire Black Suffolk who got them involved in the tour, which started off at the Ipswich Christchurch Mansions, and then the Food Museum in Bury St Edmunds, and now with us. They are a big part of it, because they were the first graphic book company to draw, and to show people of minority as superheroes. When the film Black Panther came out, it was the first time that black people could identify with seeing themselves as superheroes and that was massive. That was absolutely huge for a community that had never seen themselves in that role before. What the film stood for was a deep sense of identity, and a deep sense of being included. And that's why Marvel. It was important to bring those costumes in, where people can see their own faces in them. It's very empowering, even if you're not into Marvel, even if you're not into graphic novels, even if you're not into the film, the costumes alone have a such presence. They're so beautifully put together. I think there's something for everybody within that.

What do you hope people will feel after the exhibition?
I would hope that people take away a sense of how beautifully diverse our country is, how united we are and how all the members of our community are built up on different cultural backgrounds and religious beliefs. That's what I would like: for everybody to come in and feel a sense of safety. It's a safe space for minorities, but it's also it's also a very beautiful unifying feeling when you see it all together. Art is subjective. It could mean something very different from one person to another that I understand, but I think as a whole, it has a really warm and safe feel about it. And because it's never happened before at Britten Pears Arts , nothing like this has ever happened in the foyer, I think it's going to turn some heads and I hope for the right reason.

What is your favourite aspect of the exhibition?
I think all the aspects fit together like a jigsaw puzzle, and it feels like one coherent story. I want to create the feeling that we're all singing from the same hymn sheet in a sense.

What is your process in curating an exhibition? Is there a personal element to it?
There is a personal element, I think any curator will try and work with the environment and the artwork that they've got. Our eyes travel in a certain direction, there has to be space between pieces. Each space requires its own kind of solitary concentration. The space within it also needs examination. So there were there are lots of different levels of curating, but with this one particularly, the Marvel costumes was central stage – so the Foyer itself is there like a chapel.

What has been the proudest/favourite moment of your career?
One was this Sunday. I was at the Hannabiell concert and we had the drumming workshop, and there was a moment that I was looking at the top steps over the foyer and saw loads of faces like my own, loads of people from different demographics coming in and interacting with the art and it made me cry. It made me feel like it was part of something important and that rarely happens here. It was pretty special.

Are there any stories that have had a big impact on your life?
I would say actually, my mum and dad’s. My mum and dad's story is pretty heroic; Dad came over when he was 16 from Guyana in South America, mum came over when she was 18 on her own from South America. It took two and a half to three weeks on the boat. They came, they landed, they didn't know anybody. They studied hard, they worked hard, they grafted, and to not see your family for 20 years or so – that’s pretty courageous. There are courageous stories all the time, all over the place. So in terms of powerful stories, I think we've all got one. My dad died about 30 years ago, he was young when he died and I think what they did, and what many people did in terms of migration, is a brave thing. It's a really brave thing.

Is there anything else you would like to say?
This has been one of the most important projects of my life not just as a POC living and working in Aldeburgh for the last 20 years, but what we have all put together here speaks volumes and for me holds a deep unifying message.

It's free and open exhibition for all. If people aren't interested in Marvel there's still so much more to see and on offer. And what I'm interested in is grabbing the demographic outside the people that are interested in art, or music, or drumming workshops. Art is for everybody, art is inclusive. Let's get everybody in.

Power of Stories runs until Sunday 19 February 2023. This is the third location for the original award-winning exhibition, Power of Stories, by Ipswich Museums in 2021. The exhibition is a partnership between the Association of Suffolk Museums, Aspire Black Suffolk and Marvel Studios. 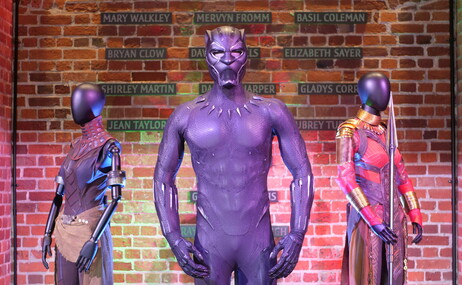 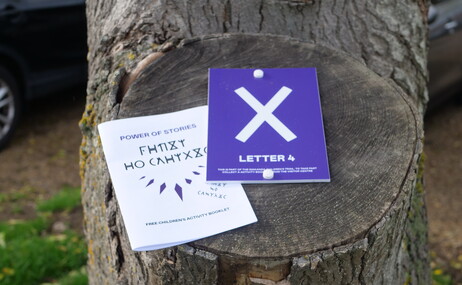