Today’s Archive Treasure lives not at the Red House but some miles away at Snape; rather than being tucked into an archive box, it is considerably bigger than a person; and rather than living in the archive it braves the elements by the Snape reedbed...

Visitors to the Red House often see the Archive building across the lawn from the Red House and, understandably, want to know what it holds. Our Archive Treasures articles, along with our Stories from the Archive talks in the foyer and a range of other activities, began as a way of talking about things that were normally not on public display but kept for safekeeping in the archive stacks. But the collection extends more widely than the material on the archive’s shelves and here we focus on something radically different.

Since 1976 Barbara Hepworth’s sculpture group the Family of Man has been one of the most recognisable features of the east front of Snape Maltings: standing across the grass from the Maltings terrace, it demands that one walk out to it to look back at the concert hall, ideally through one of its holes, or to gaze from it out down the estuary over miles of reeds towards the tower of Iken church. It is so much a part of the Snape scene that it is strange to discover that Benjamin Britten only just got to see it there. Back in the archive, files of paperwork take up the story of how it came to be there.

As a sculptor I am deeply grateful for the experience of listening to this great work, with all its strange sweeps of sound & texture, & its absolute strength & purity of conception.

Barbara Hepworth, on the first performance of the War Requiem

Correspondence in the archive (file BBA/Hepworth) indicates that Peter Pears at least was in contact with Dame Barbara Hepworth as early as 1960, on the subject of art that might be sold at auction during the Festival. However, her relationship with the two men becomes closer after 1962. In the archive is a letter addressed “Dear Benjamin Britten” – so, at this stage still a slightly formal connection – and dated “night of May 30th 1962”, in which Hepworth responds, emotionally and in the heat of the moment, to the first performance of the War Requiem. Sixty years on her emotion is plain:

“I felt it to be a truly magnificent work, & of tremendous importance to all of us both intellectually & emotionally.

The visionary quality of the balance between the finest of what is past & the understanding of the new orientation towards the future, seemed to me sublime.

For a long time we have needed to bridge the gap between tradition & the new experiences of our century. You have done this – wonderfully - & I believe it could only be achieved in humility & great compassion; &, perhaps, only in music at present?

As a sculptor I am deeply grateful for the experience of listening to this great work, with all its strange sweeps of sound & texture, & its absolute strength & purity of conception. Words are difficult for me – so forgive this inarticulate letter.

Britten’s response is not held on file, but from here on the relationship is a warmer and closer one, with Hepworth signing herself “Barbara” and addressing letters and cards to “Ben & Peter”. On Britten and Pears’ side, similarly, the relationship is one of friends. When, in 1967, Britten is unable to find time to provide music for a documentary film on Hepworth’s work, his secretary writes to the television company but he writes especially to her to say how sorry he is that his timetable made it impossible, while an undated draft telegram from him, meanwhile, asks about the loan of one of her pieces for display during the Festival. It is a friendly relationship between artistic peers who value and applaud each other’s work.

Administrative documentation in the archive of the Aldeburgh Festival takes on the story after Hepworth’s death in 1975. In early 1976 Alan Bowness writes on behalf of her executors about the question of a loan of sculpture to Snape and suggests the Family of Man group. (Twenty years later another letter in the file gives the context: Peter Pears sang at Hepworth’s 1975 memorial service and the loan was suggested in exchange for this favour.) He encloses photographs that are strange to anyone familiar with the work in its current location: we see the three figures in Hepworth’s St. Ives garden, amidst trees, a far cry from their position now exposed to every wind over the reedbeds. The letter discusses practicalities – the pieces’ weight, their dimensions, how they break down and the need for scaffolding and lifting gear to reassemble them. The cost of transport and re-erection is estimated at £500. The deal went ahead and on May 21st a press release went out, to national newspapers, to the local press such as the East Anglian Daily Times and the Leiston Observer, and to the BBC’s “Look East” programme, to announce that a week later on May 28th the sculptures would be moved into place. They were there for the 1976 Aldeburgh Festival, Britten’s last before his death in December that year, so this now-definitive piece of the Snape Maltings landscape was one that he did see, if only just.

At the time of their arrival the sculptures were the property of the Hepworth estate. However, later correspondence in the administrative file relates yet another twist in their history. In 2006 they were presented to the nation by the estate in lieu of tax, and assigned by the Department of Culture, Media and Sport to the Fitzwilliam Museum in Cambridge. The official documentation explained that the pieces were on indefinite loan to Snape Maltings and would remain there, but the ownership now changed, thirty years after their arrival by the reedbed.

Forty-six years after its arrival, the Family of Man is on the move again: it recently travelled to Amsterdam to form part of the display “Barbara Hepworth in the Rijksmuseum Gardens”, which will open on 3 June 2022. It is scheduled to return to Snape next year and resume its long vigil over the estuary. Long may it stand there.

So our Archive Treasures article this month features an item that does not live at the Red House; that we do not own; and that at time of writing is not even in this country. But it is a much-loved and long-standing fixture at Snape and, as ever, the papers held in the Red House archive are where one finds its story. 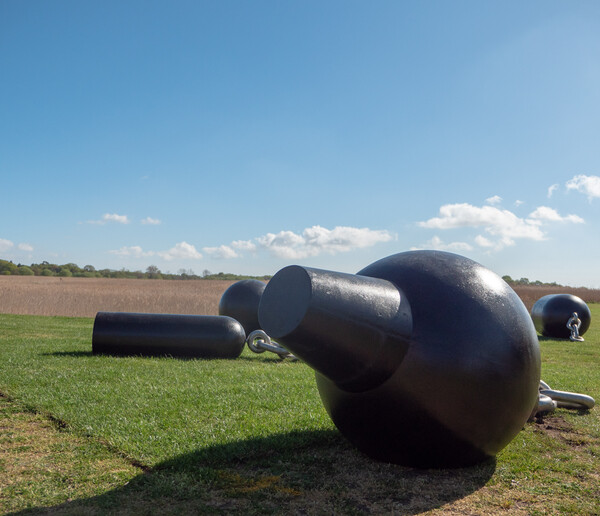